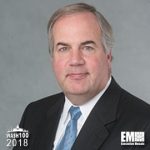 Executive Mosaic is honored to announce Matt Desch, CEO of Iridium Communications, as an inductee into the 2018 edition of the Wash100 — Executive Mosaic’s annual selection of the most influential voices in the government contracting arena–for his accomplishments in developing the next generation of satellite network-constellations and SATCOM services.

“Today’s launch is an incredible milestone — we have officially reached the halfway point,” Desch said of the fourth satellite launch. “We are excited to be taking part in SpaceX’s rocket reusability initiative and make history as the first company to reuse the same booster.”

The company’s Iridium NEXT constellation is a $3 billion satellite network that seeks to establish the infrastructure for Aireon’s system designed to provide aircraft surveillance and tracking service and Iridium Certus that works to offer L-band satellite broadband service.

Falcon 9 fielded the second batch of 10 Iridium NEXT satellites in June to join the initial set of 10 satellites that lifted off aboard the SpaceX rocket in January.

In an October 2017 interview with NASASpaceflight.com, Desch said that the company saw an increase in SATCOM demand in Puerto Rico and the Caribbean “on a scale that we have not seen before.”

“We envision a future where numerous diverse satellite architectures interwork to support the dramatically expanding IoT universe,” he noted then. “From high bandwidth access points to highly mobile and low latency devices like Iridium supports today, to low power, higher latency networks like Magnitude Space envisions, Iridium has the experience and global platform to enable all of these capabilities to inter-work.”

Prior to Iridium, Desch held senior leadership roles at telecommunications companies such as Telcordia Technologies, Nortel Networks and Global Carriers.

Executive Mosaic congratulates Matt Desch and the Iridium team for their selection to receive this award.