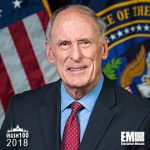 Executive Mosaic is honored to announce National Intelligence Director Dan Coats as an inductee into the 2018 edition of the Wash100 — Executive Mosaic’s annual selection of the most influential voices in the government contracting arena.

Coats became the fifth Director of National Intelligence in March after Senate confirmed his nomination for the post.

In his role, Coats oversees the U.S. Intelligence Community and serves as the principal intelligence adviser to the president.

A former congressman and U.S. ambassador to Germany, Coats previously served as a Republican senator from Indiana and as a member of the Senate Intelligence and Armed Services committees.

In September 2017, Coats co-wrote a letter with Attorney General Jeff Sessions to call on Congress to reauthorize a provision of the Foreign Intelligence Surveillance Act that was set to expire by the end of 2017.

They noted how a specific section of the FISA Amendments Act of 2008 – Section 702 – helps intelligence agencies protect the country from international terrorism and cyber threats through the collection of foreign intelligence data on non-Americans outside the U.S. while safeguarding the civil liberties and privacy of U.S. citizens.

The provision was extended under a four-week continuing resolution that Congress passed in December 2017.

Reuters reported in December that Coats ordered stricter restrictions on the “unmasking” of identities of individuals during presidential transitions.

The new policy is set to take effect Jan. 15 and seeks to “make clear that IC elements may not engage in political activity, including dissemination of U.S. person identities to the White House, for the purpose of affecting the political process of the United States,” he wrote in a letter to House Intelligence Committee Chairman Rep. Devin Nunes (R-Calif.) on Nov. 30.

Executive Mosaic congratulates Dan Coats and the ODNI team for their selection to receive this award.